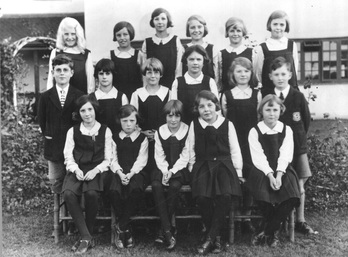 St. Helen’s College was founded in 1924 as a private school for girls aged 4 to 16.  The photo on the right was taken during that period, and kindly donated by a pupil of that 1928 class.

The original school building at 281 Long Lane was bombed during World War II, and Mrs. Hempstead, who by this time had succeeded the founding Heads, moved the school to 223 Long Lane where lessons continued during the war years.

The school moved to its present site in Parkway in 1948, began to admit boys and restricted the age of pupils to 11. Following her retirement, Mrs. Hempstead followed the progress of the school with interest until her death, at the grand age of 103, in 2010.

The Lower School was established in Long Lane in 1999, and the Upper School facilities have been developed gradually over the last ten years. Ducklings Kindergarten, a setting for 2-3 year olds, was established in January 2017. There are now approximately 380 pupils at the school.

I feel that the school strives to improve all the time

Lasting friendships flourish at St. Helen’s College and ex-pupils and their families retain strong links with each other and with the school.

Each year, many Old Helenians return to school to support events such as Sports Day, the Summer Fete and the Year 6 musical at the Compass Theatre.

If you are an ex-pupil or an ex-staff member and would like to register with the Old Helenians Association, we would be delighted to hear from you! Please contact us at oldhelenians@sthelenscollege.com or telephone us on 01895 234371. Old Helenians receive news from the school and are invited back to reunion events.

Mr Crehan and I attended a very successful Sports Day on Friday. At the final ceremony Mrs Drummond unexpectedly asked if I would like to say something to the gathering. Observant parents will have noticed the slight tussle between Mr Crehan and myself - he is always so good at the on-the-spot speeches whereas I would rather think it through beforehand and this is why I will frequently sing my speeches at weddings/ events and also at the end of term to the leaving teachers - I prefer to have time to think it all through and consider my words  (often rhyming!) I woke up in the early hours of the morning and realised that I did have something I'd like to say on the subject of this year's Prep Sports Day  but I wasn't ready to say it on the day, so here it is in a blog! ( Not a song on this occasion.) I go back a long way in St.Helen's history. I was 11 years old when we moved in to Cambria to live when my mother, Mrs Evans, took over the school from Mrs Hempstead, who was the 2nd head teacher in its history.  I have been associated with St. Helen's for 52 years of its 98 years. ( Any ideas for how to celebrate our centenary in 2 years time gratefully appreciated!) So 52 years ago St.Helen's Sports Day took place in the grounds of Oak Farm, exactly where our Lower School buildings stand today. We had 60 metre tracks painted out and the races were sprints, slow bicycle ( where you try to be last to cross the line by wobbling slowly on your bicycle), egg and spoon, sack race and dressing up race where you put on various items of clothing and then race to the finish. I don't think there were any field events. Going back as far as I do, I am aware of tradition and not losing some of the things from the past that we have valued at St. Helen's, perhaps for sentimental reasons, while obviously embracing things that are clearly beneficial to the children and the school.    This Sports Day was very different under the sports leadership of Mr. Harrington; it was a great improvement on the distant past and even on the more recent past. It was fantastic that every child got the opportunity to try every field event, as well as timing each child individually in their sprints so that the finals were fairly raced against the fastest children in the afternoon. The all day format and the huge help offered by the Year 9 ex-St.Helen's children meant that the day was reasonably relaxed for the staff, and hopefully the parents enjoyed the opportunity to follow their children around the stadium followed by a picnic lunch with their family. There were many other changes; the most memorable was the whole school relay with every child running in short bursts, governed by a flag being waved Grand Prix style by a staff member. So this was clearly a great improvement on the Sports Days of 50 years ago but there is something that hasn't changed underlying the day; mainly the strong values demonstrated, but also the attention to detail and the meticulous organization. There is something special about the essence of St.Helen's which has been handed down through the generations and is still very tangible today - the DNA that also brought so many ex- pupils back to our school fete. A unique factor from St. Helen's history is that there have been only 5 sets of heads ( sets in that two sisters founded the school and then Mr Crehan and I led the school together) in almost a century and each head has chosen their own successor according to their values and the direction they want for the school. This will have led to a strong unison of purpose over the years, which is still  imbued by every teacher and pupil. Just as the baton is passed on in a school relay each pupil needs to hold on to the core essence of St. Helen's and then pass it on to the next generation of pupils to preserve for hopefully our next few hundred years! Our unique DNA is our firm foundation on which we build the future, and St.Helen's is very forward- thinking in every area of the curriculum. Aren't you glad I didn't say or sing all this at the end of a baking hot Sports Day? 'It ain't what we do, it's the way that we do it!' Mrs Crehan
Posted on: 17/06/2022